Mateguas Island, A Novel of Terror and Suspense

Journey to an island … shrouded in mystery….

What could be more idyllic than to live on an island off the coast of Maine? That’s what Bill Andersen thought when he moved his family to Mateguas. But Mateguas is more than just pristine beaches nestled between rocky shores. No, Mateguas is something quite different as the Andersen’s will soon find out.

On a remote island, a troubled family is trying to start over. But unbeknownst to them, the property they have inherited is steeped in ancient magic … magic that could seek to consume and destroy them.

An arcane locked box, a dark and twisted trail leading deep into the woods, a seductive young woman, and tales of a malevolent Native American spirit are just some of the perils Karen Andersen must face it she is to find a way to save her family.

"Surprising twists and turns and a powerful old box filled with magic: these are the elements of a fine horror story that slowly builds its plot with believable protagonists and engrossing color...Any who like horror stories and gothic fiction will find Mateguas Island an exceptional read." ~ Diane Donovan, Senior eBook Reviewer, Midwest Book Review

Mateguas Island, the first full-length novel in The Mateguas Island Series, is the recipient of the 2014 Gold Medal in Supernatural Fiction (Readers Favorite International Book Award Competition), the 2014 First Place Award in Contemporary Gothic Fiction (Chanticleer Book Review Paranormal Awards), and was named the 2015 Outstanding Novel in Horror/Suspense by the Independent Author Network's Book of the Year Awards. 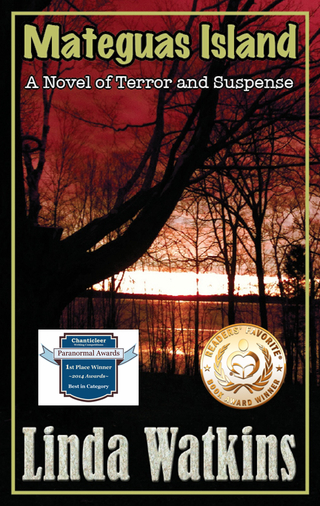