Linda Watkins is the author of the multi-award-winning MATEGUAS ISLAND SERIES. She currently resides in Sedona, Arizona and, in another life, was a Senior Clinical Financial Analyst at Stanford University School of Medicine. In 2006, she packed her belongings and, along with her four rescue dogs, took the plunge and moved to a remote island off the coast of Maine. It was there that she wrote MATEGUAS ISLAND, which has garnered the following awards:

The second novel in the series, RETURN TO MATEGUAS ISLAND, was also awarded a First Place in Contemporary Gothic Fiction in the 2015 Chanticleer Book Review's Paranormal Awards and was named 2015 Finalist in Horror by Readers Favorite International Book Award Competition, and 2016 Finalist in Horror by the IAN Book of the Year Awards.

GHOSTS OF MATEGUAS, the third novel in the series, was published in early 2016 and, in 2017, was named "Finalist in Thrillers" in the Book Excellence Awards and "Finalist in Horror/Suspense" in the IAN Book of the Year Awards.

In addition to the MATEGUAS books, in 2017, Linda published a new stand-alone novel, SUMMER GIRL, and a novella, SARAH & ZOEY, A STORY ABOUT THE POWER OF UNCONDITIONAL LOVE.

Today, she is working on a new series of gothic fiction, THE KATE POMEROY MYSTERIES, the first installment of which she hopes to publish in late 2018. Also, on her agenda will be to write the fourth installment in THE MATEGUAS SERIES.

Serious about dog welfare and rescue, all net proceeds from sales of THE MATEGUAS ISLAND SERIES are donated to Linda's charitable trust, The Raison d'Etre Fund for Dogs, Dedicated to Rescue and Research.

To take a look at her other works or communicate with her, please visit her website (www.lindawatkins-author.com), her blog where she posts book reviews and other features (www.lindawatkins.biz) and/or her novel website, dedicated to the Mateguas Island Series (www.mateguasisland.com). 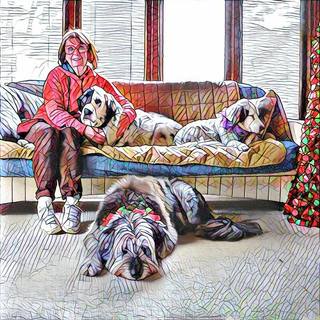